It's a bit confusing so hear me out.

You can press SPACEBAR to interrupt her. Do this when her eyes are fully open  or blinking(usually after thinking in place for a bit) and you'll have a window of time where you can tell her where to go, if you click on any task in the screen.

You need to get working, quick! One project for class, one deadline for work, both before the end of the week. Can you do it without completely avoiding the problem like the normal person you are? Or will you go crazy and lose control trying to do everything?

This game was based on mixed personal experiences over several years. Exaggerated as i never had it this bad, not by a long shot, but it was funny to think about.

Music by the wonderful Bauti777!

Helped by the great Porcongo and Nico!

EDIT: Added small screen explaining the main mechanic more easily, and made it a bit harder to win.

My name's E3 days ago

idk how to screenshot but i basically just restarted until i got a good run, she had 1 breakdown in the good run and i found out why it says you dont want to pass out in another run lol

Somehow I managed to finish both tasks at 7AM of the final day, without even breaking down once. 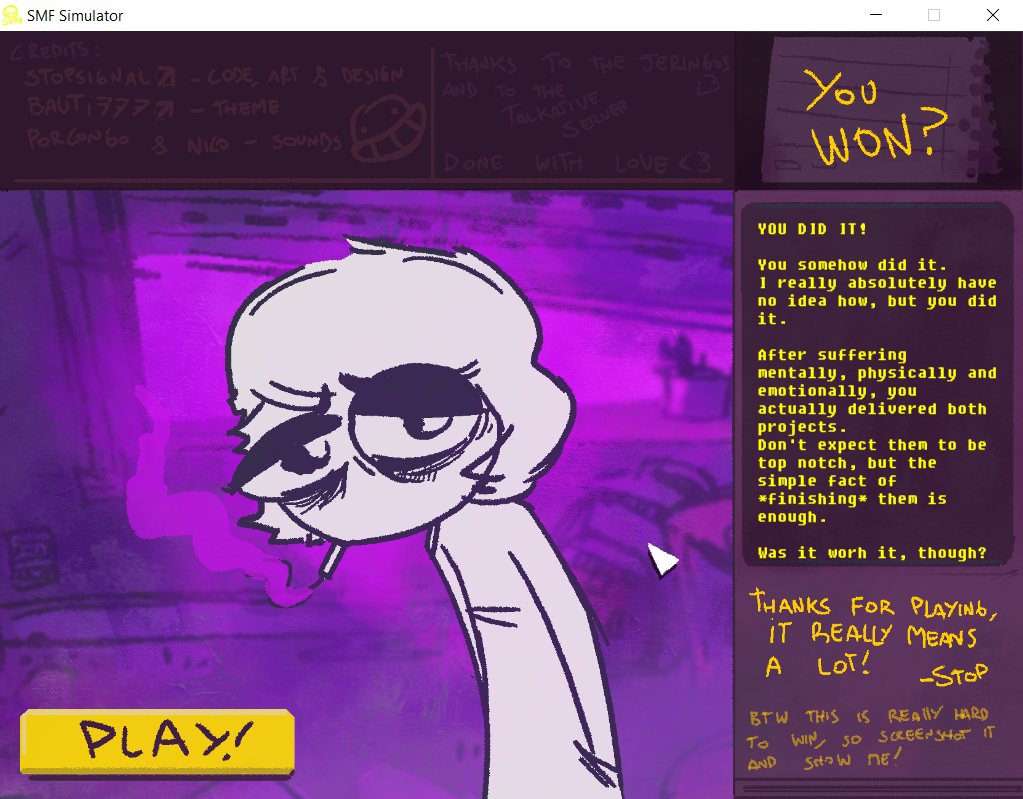 It is balanced so you always have to get to an almost breakdown point to be able to win! This is by design- the story tells itself, doesn't it? Hahahahaha

Pal, keep it going! And take care of yourself. After playing things like this, real life looks more manageable somehow, hahahah. Hope it helps you, some way. Good luck with the work and homework pile! If you survive be sure to tell here, i'm sure it would lift the spirits of other people in the same problem!

Thanks for the kind message, I will! :)

Hey there, Im back from the abyss! :D

As I found out later, the semester I was going through was one of the really difficult ones, which was by design. Its made like this so that the students can take their time later when working on their diploma thesis.

I thankfuly managed to finish all my homework and projects while working, but that wasnt the end, since the exam period came along after.

Since I was working on the projects and everything else, I didnt have time to pay attention to some of the subjects during the semester, and I had to make up for that now.

And I mostly did, except for two subjects.

Unfortunately, they were the kind which require profound understanding to pass, and I really just didnt have time or energy to dive into them during exam period. So I didnt make it.

Fortunately, there was a make up term at the end of the holidays. Which I just succesfuly finished for both of them. :)

So yes, Im finally done with this crap.

Glad that you could make it! It's hard, but doable. Congratulations!!!

The fact that you remembered to reply is really kind of you, hahahaha, i had thought you maybe couldn't do it. Luckily that wasn't the case!

This makes me really happy. Keep that up, bud! Cheers!! :)

Now time to relax, for a little bit!

Im glad to hear that you feel happy for me, its really nice to hear. :)

About the reply, I wanted to wait until I had the good news to tell, and also as a form of catharsis. Since this game resonated with my situation this much, I wanted to say "Im done!" here after saying I would.

And yes, definetly gonna take my time with the rest of the holidays.

I was at the very end with some homework left to do but a lot of misery. I thought it was a hopeless situation but then she said something like "fuck it" and did the rest on her own without command! It was awesome.

It is already very good at picturing how much you are screwing yourself when you stay "5 minutes" more than intended playing games or watching media and I think after this I may be less prone to do so in the future, hehe. Thank you!!

The theme was GREAT. Maybe... it could actually help people? The idea of such game could grow to something bigger, something of benefit for those who struggle with resolution and/or those who watch them from the outside and see only a lazy undisciplined person (the game might open them to a new insight, graphically). Perhaps you could contact a friend in psychology to know their opinion, about how accurate this is, or how could it be improved?

Hah! That was extremely lucky for you, but it's a really nice story on its own o:

I hope it helps you! It had when i made the game, but lately it came back. Oops. But i do have hope for you! Keep it strong! <3

I wish i could know more about that, but i got no psychology friends, sadly (would be cool, though)

I mean, i really do hope it does, however! At the same time, it's such a downer of a game, i'm sure some things would need to be changed to be uplifting. Man, even winning sucks, hahahaha. Which reflects this kind of situations in real life, but still!

ummm why does she walk backwards

Might be a bug, oops. Or maybe she's moonwalking!

Finally managed to win it, in my 6th attempt. Poor gal was miserable all the way on the end, but at least she was able to handle it! Also, i dunno if it is intentional or not, but you can 'cheese' it a bit by, when she is about to go on a breakdown, you keep spamming spacebar and clicking; that'll cancel the action, so at least you have another shot of trying to get her to do the action you need her to do!

Thank you and everyone involved on the game. The art is adorable, and the theme, relatable. Looking forward for more creations from you guys! 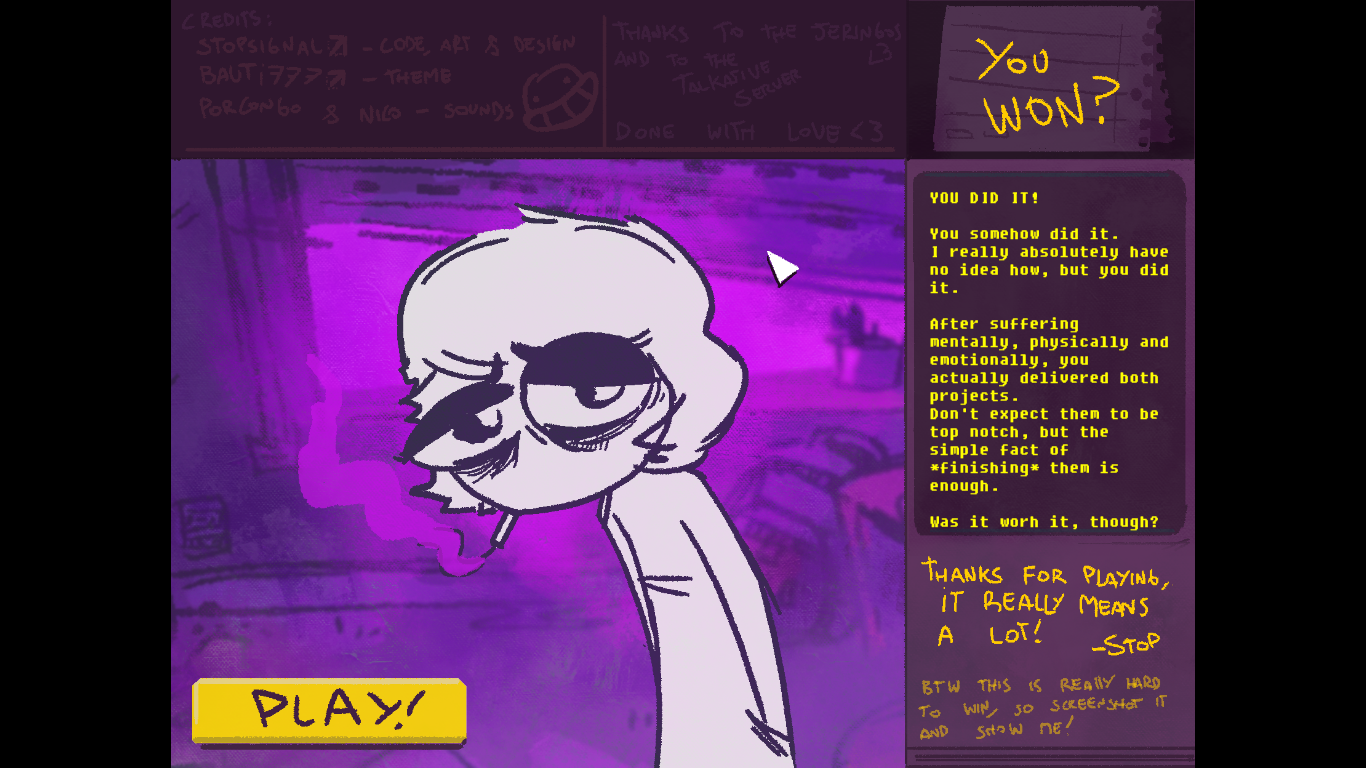 Hah! I thought i had fixed that. Live and learn!

Thank you so much for the nice comments, shareazu! <3

It was, and is, such an important game for me, and comments from people just make it even more important. <3

After hearing about your charming little game here, it intrigued me quite a bit so I downloaded about an hour ago of this comment to try out the challenge. After the 3rd attempt, with careful management, some pushing her to the edge (deliberately maxed out her Stress and Misery), and a bit of RNG blessing: 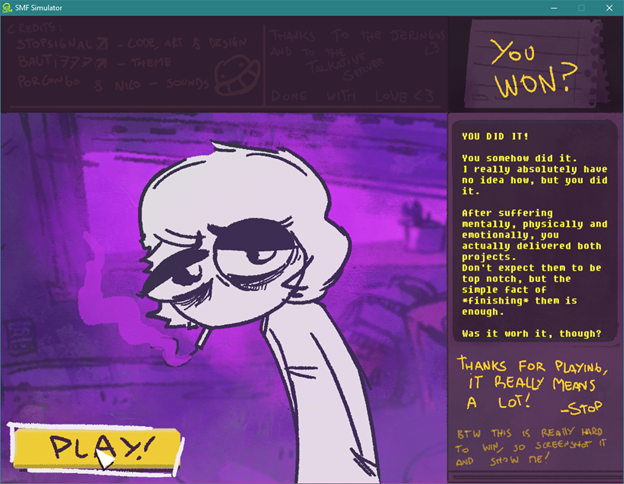 The gameplay loop is indeed interesting and well thought out, with the involved mechanics sufficiently balanced against each other. And while the RNG aspect is skewed towards making it "really hard to win", it is also befitting the theme of the game.

Thank you for this endearing experience, and I wish you all the best in your future projects and endeavors.

Thank you so much!!! And indeed!

I'd generally never would dabble into so much RNG (though my newer game has a lot, but not this bad) but the theme required it, and to be honest, without it the idea wouldn't have been so poignant. It helped a lot. Who would have known!

Thank you. Best of luck to you too, Ser Evergreen! 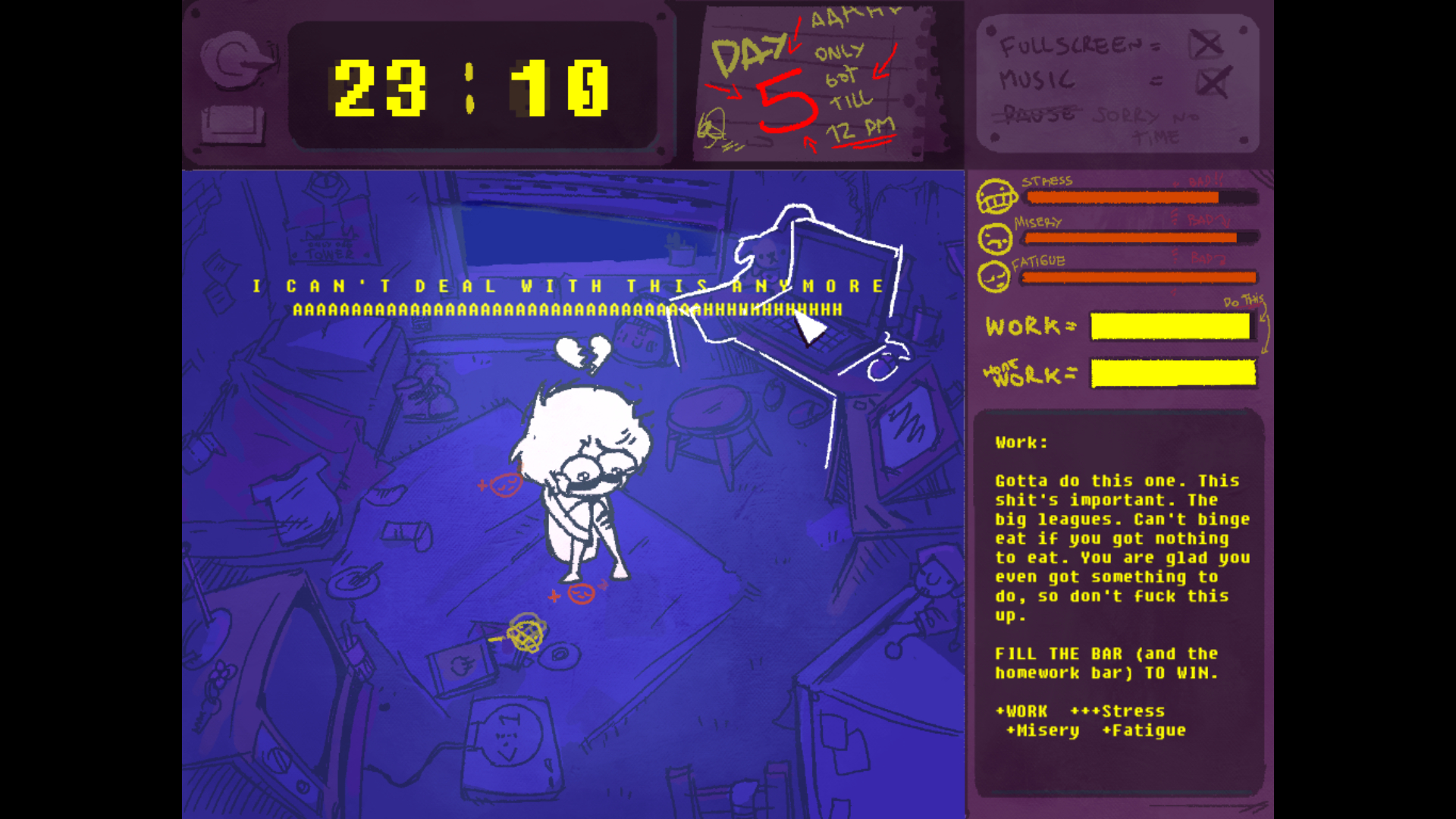 Literally Work was at 97% and Homework was finish 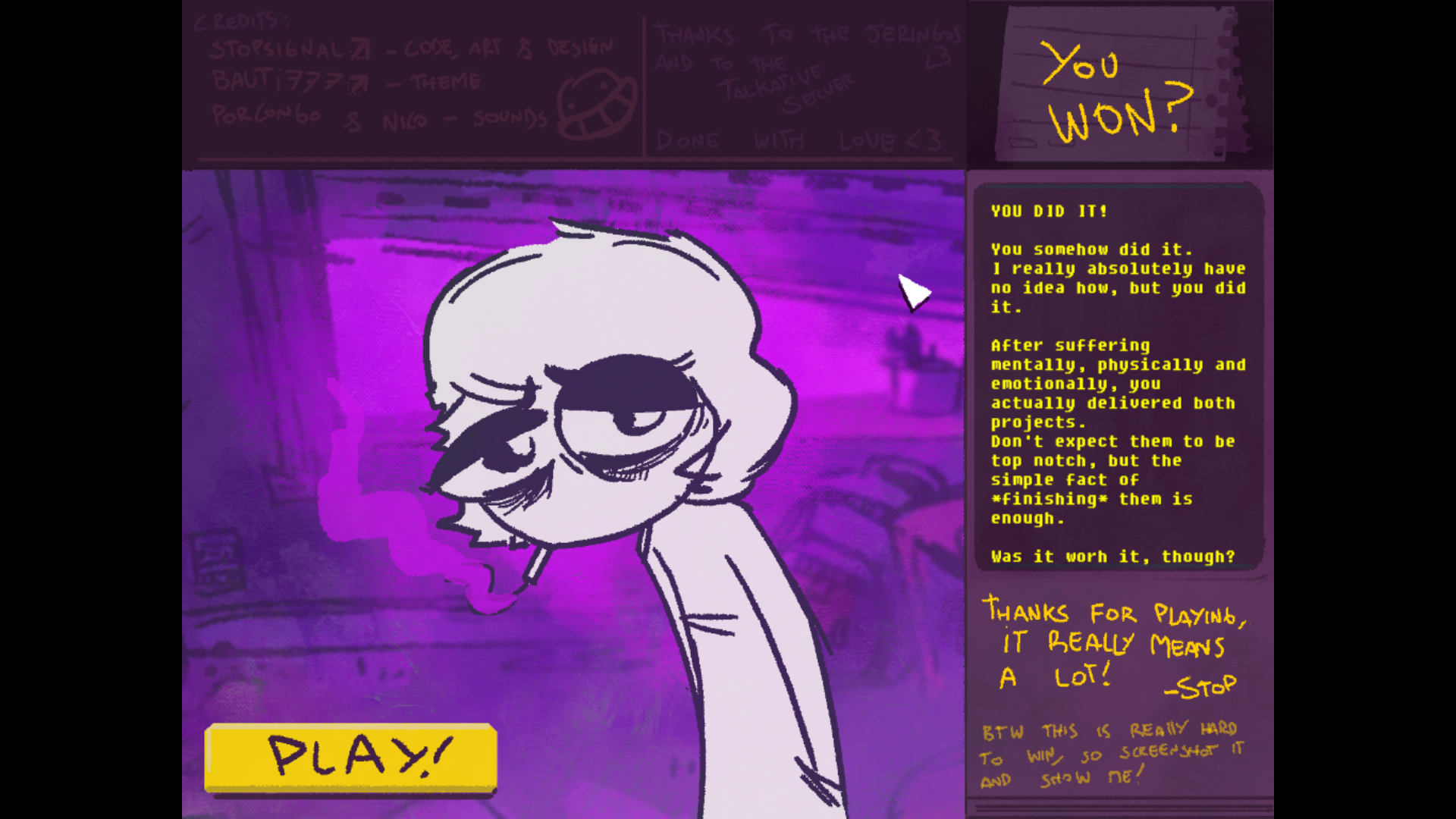 I can finally rest in peace... XD

It makes me happy that you played it through, thank you so much!!

I've been wondering if using the Bed and having the character pass out from Fatigue is any different since out of all of the tasks, sleeping has the most 'rng'.

Either way, the only task that I didn't directly do is Watching TV and Sleeping (unless she did it herself), and that getting Homework done as early as possible is better due to Misery slowing down the character in the last few days is pretty painful.

Hello! I played this game for the first time. I tried pressing work immediately until her stress maxed out. She wasn't doing anything. And then yeets herself out of the window. I'm playing SFM Simulator Final. Itch won't let me post this comment with pics for some reason. 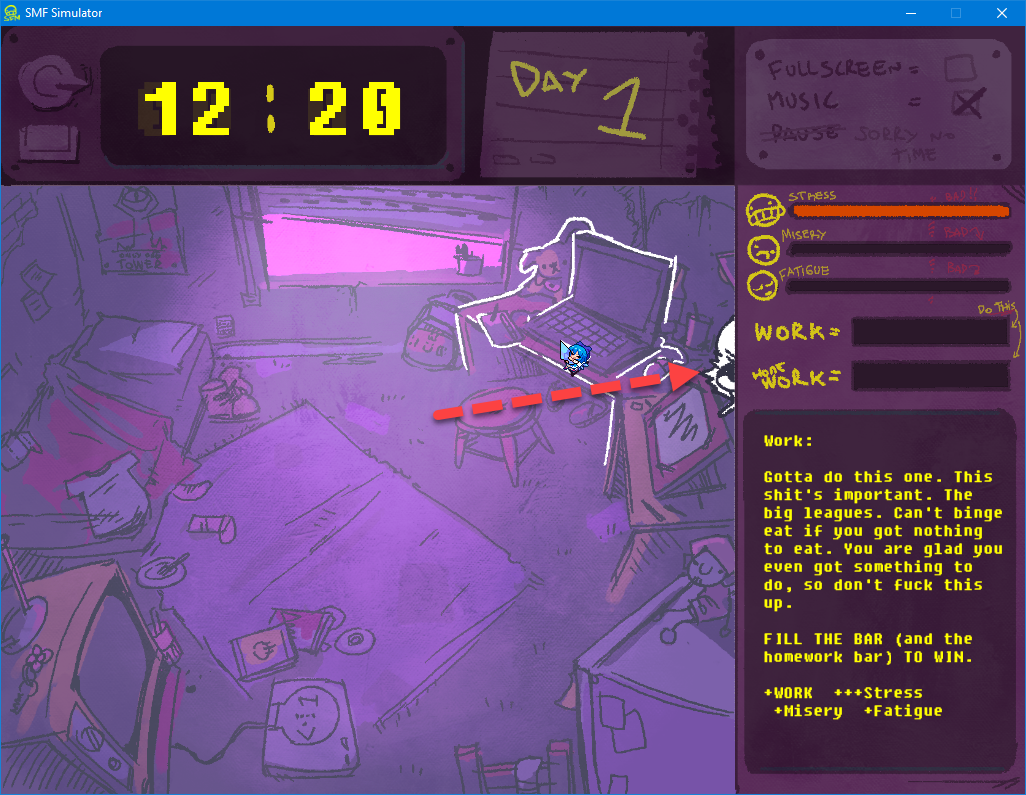 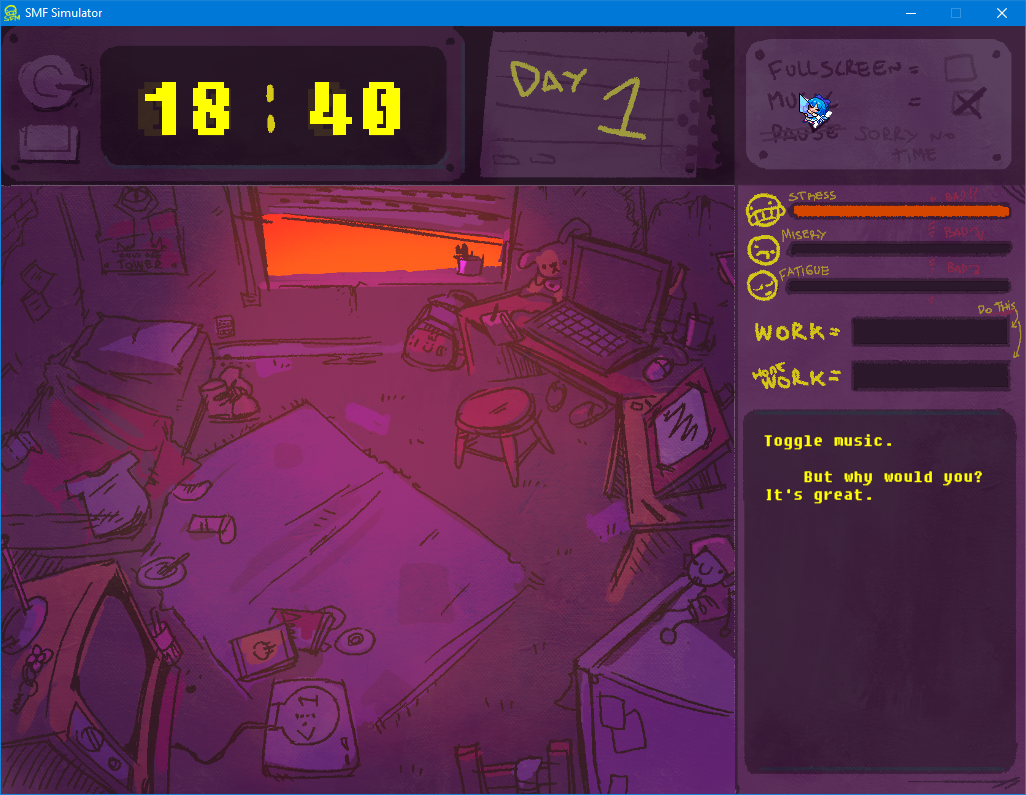 Hello! you gotta wait for her to stand up and blink!

Then you can press space and tell her where to go. Only click once!

It was the most intuitive (read: not at all) thing i could come up with those two days, hahahaha

edit: i'm too tired i didn't see the problem with the picture. Thats... strange. I'll check it out!

Happen to me as well, what I found out that makes her move off the screen like that every time is that when you immediately alert 'her' by either pressing space or clicking any task at the start, but not interrupting her when her eye is fully open, she'll begin walking off-screen.

What Archeia probably did is just spam the 'Work' task instead of using the space button to interrupt her, which for some reason breaks the pathing where she moves off-screen instead of to a random task in the room.

Yep. I wanted to see what'll happen if I stress her out to the max haha. I did mention I spam work button but it probably wasn't obvious ;; 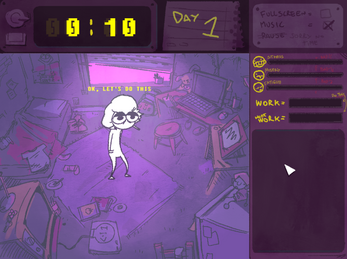 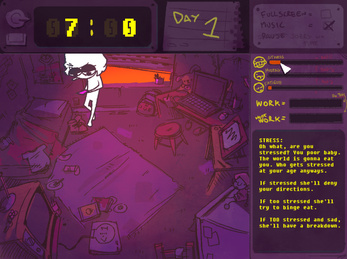